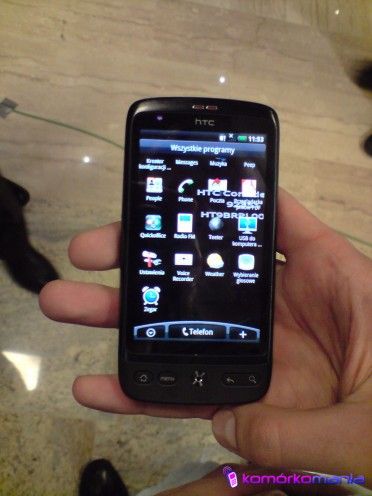 The first one (Android OS equivalent to the HTC HD2) is to be officially presented in March, and sales should hit in April. I recall that on board we can find among others: 3.7-inch AMOLED touch screen with WVGA resolution, Qualcomm Snapdragon processor 1GHz QSD, 3G HSDPA, WiFi, GPS, 512MB RAM, sound Dolby for Mobile Camera 5Mpix with video recording capability in HD (720p) and the Android version 2.1 with the overlay Sense UI.

Unfortunately, there is no photos of the HTC Legend model, but here are the specs of this phone:

The most important are 2 things: the aluminum body of the phone and AMOLED display. Legend entire body is made of aluminum and it can not be broken. Element, which can remove the plastic, lower part of the back cover. After the photo shows us a place for the battery, SIM card and MicroSD. The second part is a removable cover antennas located around the camera and LED flash.

Phone no: 5Mpix camera, flash, AMOLED display (probably 480 × 800, 16 million colors) and the system Android (I learned that probably 2.1 but this is dependent on whether Google succeed in later versions or not) is standard trackball converted into optical sensor (as HTC Bravo). Under the display there are 4 function buttons: back, menu, back to the main panel and Lupka. The whole phone seems to be smaller and zgrabniejszy the HTC Hero (rounded corners) with the characteristic curve. The camera has to have its official premiere in March, also (suggested price of about 2100 zł).

As you can see, smart phones promise to be extremely interesting and looks (probably like most of you) I look forward to their official presentation.