SanDisk’s latest memory card is available to order now for 99.99 GBP, with shipping expected to start on the 20th April. 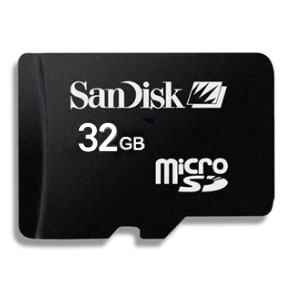 The 32GB card is a must have accessory for anyone with one of the latest multimedia phones such as the HTC HD 2, BlackBerry Bold 9700, Nokia N97 Mini, Nexus One and Samsung Jet and that likes to have all their music, photo’s and music with them where ever they go. To give you an idea on just how much this can hold, you can store 4000 songs, 5200 photos and over 30 hours of video, and still have room for all your apps.

SanDisk are promising no compatibility issues. If your phone works with a 16GB micro SDHC card, it’ll work with the 32GB card. Demand for this is expected to be huge, so place your order now and be one of the first to get them in April.